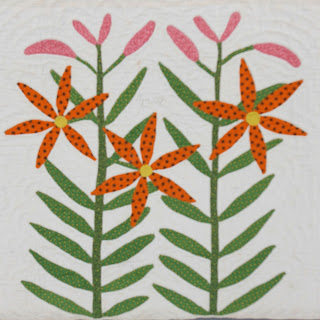 Tiger Lily the History & Details of the Original block - Month 7

"Esther Matthews probably purchased some fabrics for her quilt from local merchants. The orange and brown dot fabric used in the Tiger Lily has been found in another quilt made about 10 miles from Esther’s home in Lacey Spring. The fabric is probably an American print manufactured in New England." ...Neva Hart 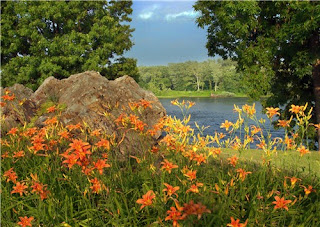 Did you know Tiger Lilies grow wild along roadsides, wooded areas and streams in the Shenandoah Valley?

Here in the state of Virginia, these orange beauties are a common part of our Summer landscape.   Here are a couple of fun facts about the Lilium_columbianum:  Tiger lilies are native plants found in a great many areas around the United States.  And they are entirely edible.  Do they grow where you live?

This month I'm going to share with you a technique for making Easy Peasy 1/8" bias binding.  It's not for everyone, but it is a super fast alternative for making narrow bias stem work.  I used this very method to create the small side stems that hold up the buds on my own Tiger Lily block.

"Cut a square once on the diagonal. (the one below is 9") Now subcut into 3/4" strips. Lightly spray the strips with starch, fold in half and press. Now fold in half again and press. Make sure the fold edge extends slightly beyond the raw edge. THAT's IT! You now have crisp edged 1/8" bias stems....Easy Peasey!  Cut to size and stitch in place. (I use a few teeny dots of Roxanne's glue baste it to hold them in place before stitching" ...  Doreen Johnson

Below is the order in which I stitched the Tiger Lily block together. 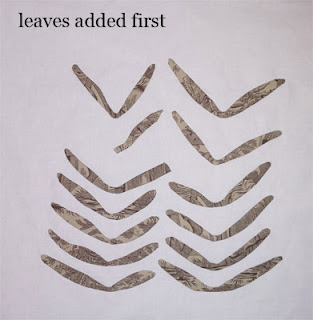 I treated the leaf pairs as one single applique' shape. 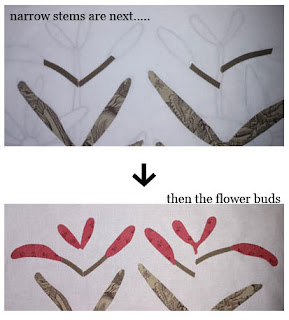 Next, I added the narrow 1/8" bud stems (as shown in the top picture at left)  Once they were added, I applique'd the flower buds in place.

The 2 central stems were added and then the petals of the Tiger Lily flowers.

The center circles were added to the flowers to complete the block.
Here is my finished Red & Taupe version of the Tiger Lily block: 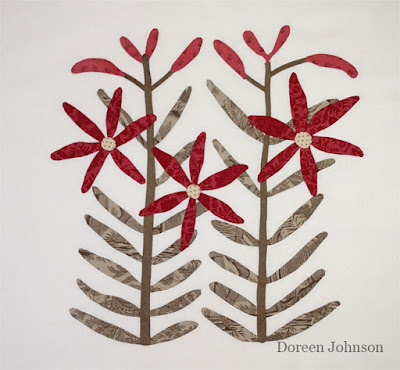 We would like to thank all the amazing Quilter's that are participating in this Botanical Sew Along! Thank you for continuing to share your beautiful blocks with us each month. Your efforts are FAR reaching. You truly inspire and motivate quilters of all skill levels from around the World.

Thank you for continuing to share your photos!
If you are starting, catching up or up to the current - keep sharing. 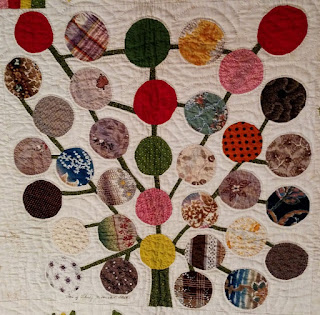 It is so exciting to get the photos for the mid month post.

The COLOR!
The CREATIVITY!
The TECHNIQUES! 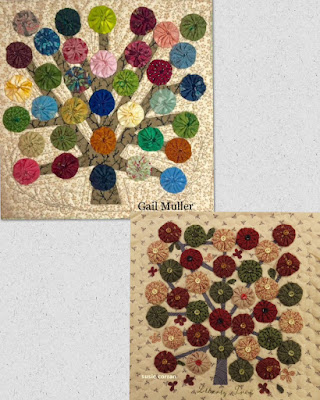 Quilt As You Go 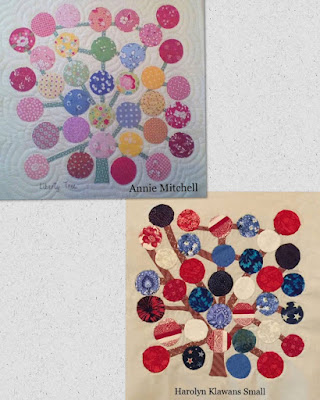 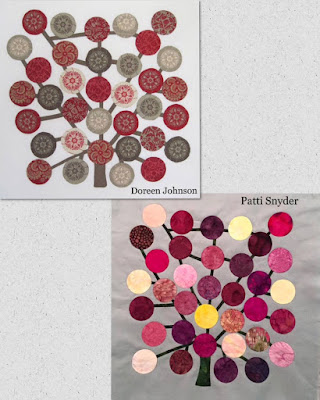 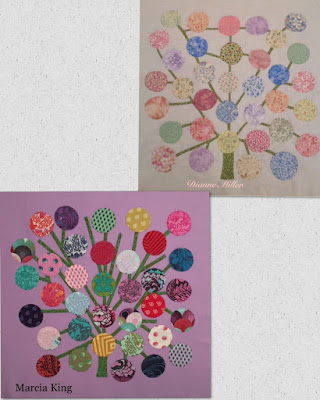 
Not afraid of Color - Playing With Stems

See more blocks and add your own photos on our Facebook page found HERE or email them to us and we will share them in a post at the end of this month.
Be sure to visit our Blogging Friends that are also participation in the Sew Along!
Click on the pictures of their blocks below to take you to their blog pages.
Check back often, we will be adding more links over the next week or so. 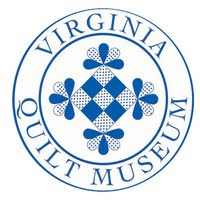